Who is Famous and What Is Hard? with Seth Adams 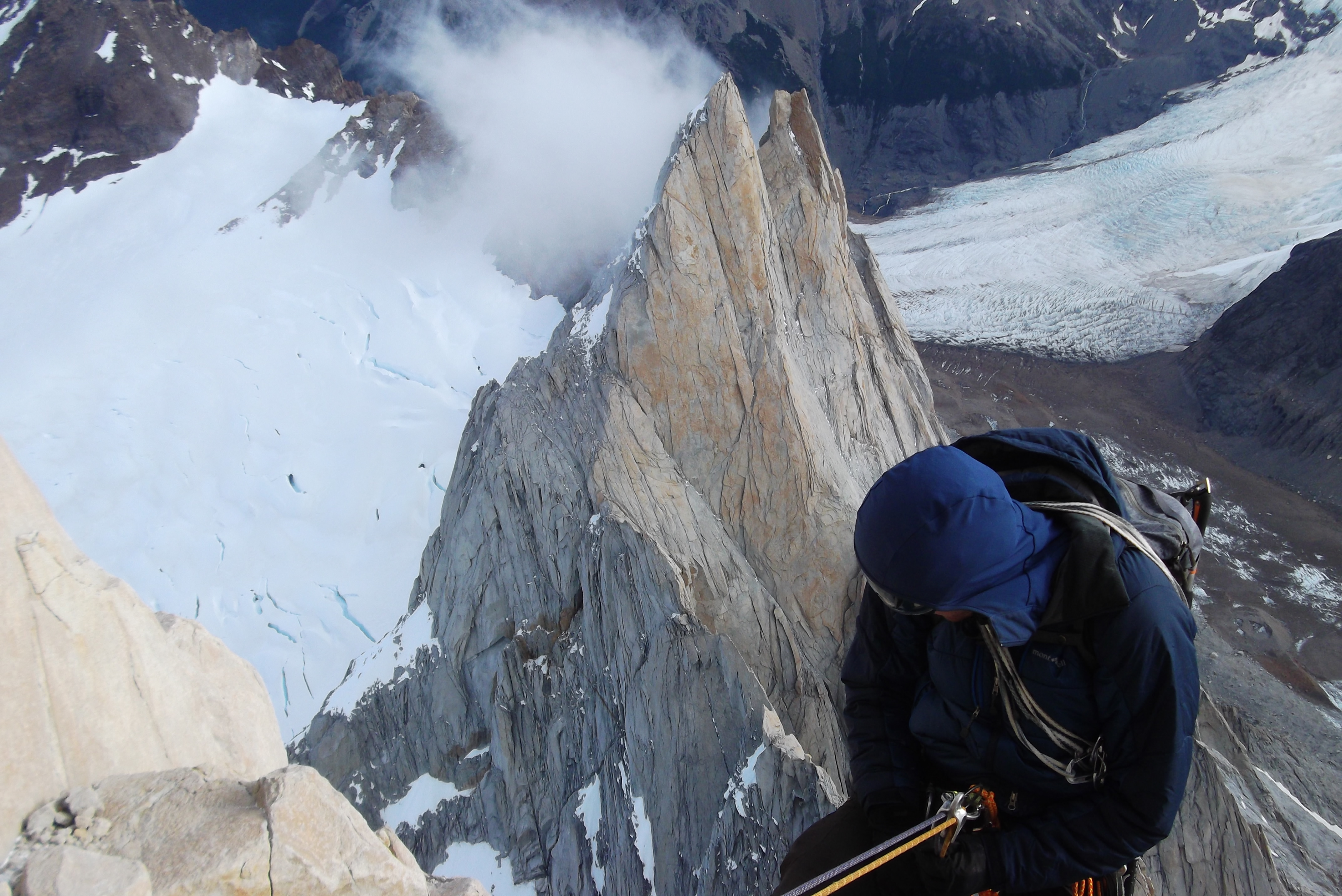 It was 2004 and Kelly Cordes and Josh Wharton had just climbed the Azeem Ridge on Great Trango Tower in Pakistan, which was the longest rock route yet climbed in the world, and a very impressive accomplishment.

We were sitting around at my friend Jeff’s house talking about it. It must have been a Wednesday, because that is when we sit around and talk shit.

I was aware that this was a very big accomplishment in the world of climbing, but I was confused.

“Um,” Started Jeff.  “I mean, yeah, I’ve heard of him. He’s done a lot of really hard… I guess he’s…. you know, Seth, this Famous/Not-Famous dichotomy is a weird thing you do.” 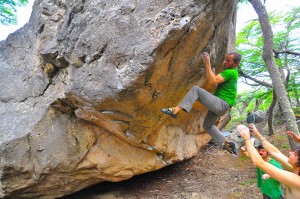 Nine years later I’m in El Chaltén, Argentina, the take-off point for climbing in the Fitzroy Group. High climbing season is coming, and the place is overrun with climbers. I’ve just arrived and found my good friends Sarah and Colin (you know Famous Climber, Colin Haley), and they’ve invited me to join them and their friends for dinner.  Their friends are Josh Wharton, Mikey Schaefer, and Bryan Gilmore.

Colin is a very matter-of-fact guy, and direct questions always meet with direct answers. So as we walk to the restaurant, I ask for clarification:

“So is Josh Wharton a dick?”

“Isn’t he just tall and serious?”

“Well he is tall, but he’s a perfectly…”

“Oh my god, Seth” Sarah cuts in. “Please don’t be really awkward and embarrass us.”

A few minutes later we’re sitting at dinner. I’m mostly on my best behavior. Josh, it turns out, is not a dick at all.  The five of them are talking about bouldering, while I have nothing to offer to the conversation. Josh was working on a problem that day, and he says it’s really hard and really fun. 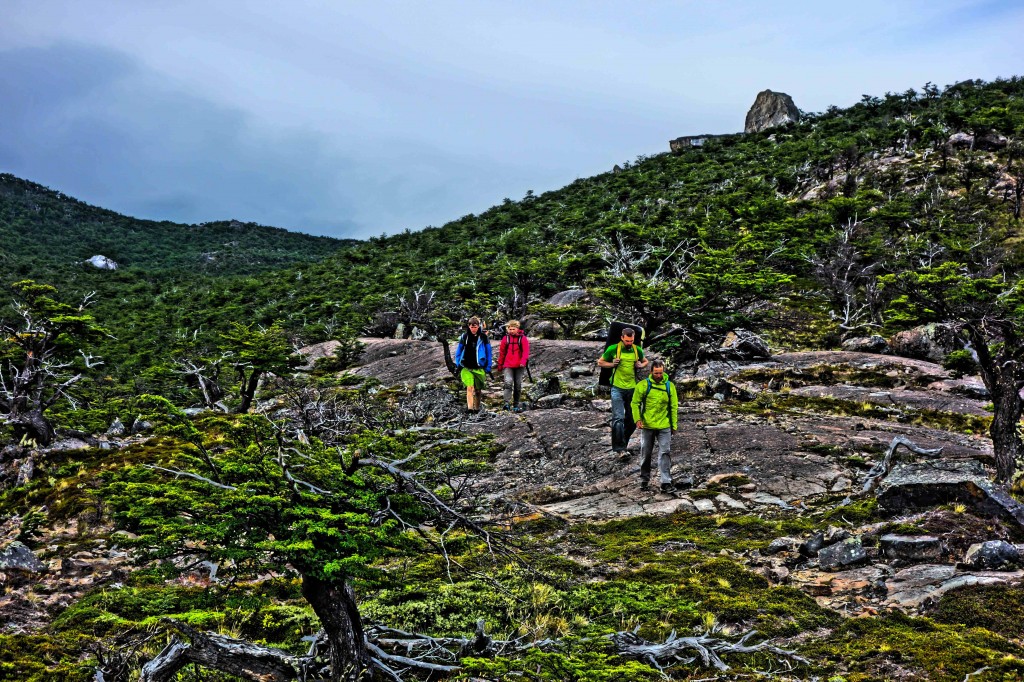 (L-R) Peter, Hazel, Josh and Bryan return from a day of bouldering.

“What was more important,” Colin asks, smiling, “The hard, or the fun?”

“Be true to yourself,” he admonishes.

Josh sits back, looking relieved. “The hard.” he says, happily.

At some point, many years ago, Carl Tobin was the Realest Climber I’d ever met (and actually, being fair, he should still probably rank high on the list). I was still a pretty new climber, trying to come to grips with how I would ever Be Like Him, a Real Hardperson climbing Big Routes in Big Mountains. I asked him something I was struggling to understand:

“But,” I started, almost as a complaint, “When you’re standing down there on the glacier – and everything is fine – and you look up at your route, and you know that up there resides fear and danger, how do you leave the glacier?”

It was the most unsatisfying answer I could possibly have gotten.

The truth is: I don’t really like hard climbing. I gradually get better at climbing, and slightly harder climbs are beginning to get easier for me, but my Bowl Full of Adventure still finds itself filled to overflowing pretty easily – I find that some adventures fit in a little better than they used to, but the capacity of the bowl has not changed. Sometimes, I just get worn out from being up there, and I grasp desperately to understand the people, like Josh Wharton, that love hard climbing just for its own integral hardness. Oddly, something that makes me reluctant to do hard multi-day climbs is that I get tired of being careful not to drop things. I don’t think that Josh or Carl would understand. 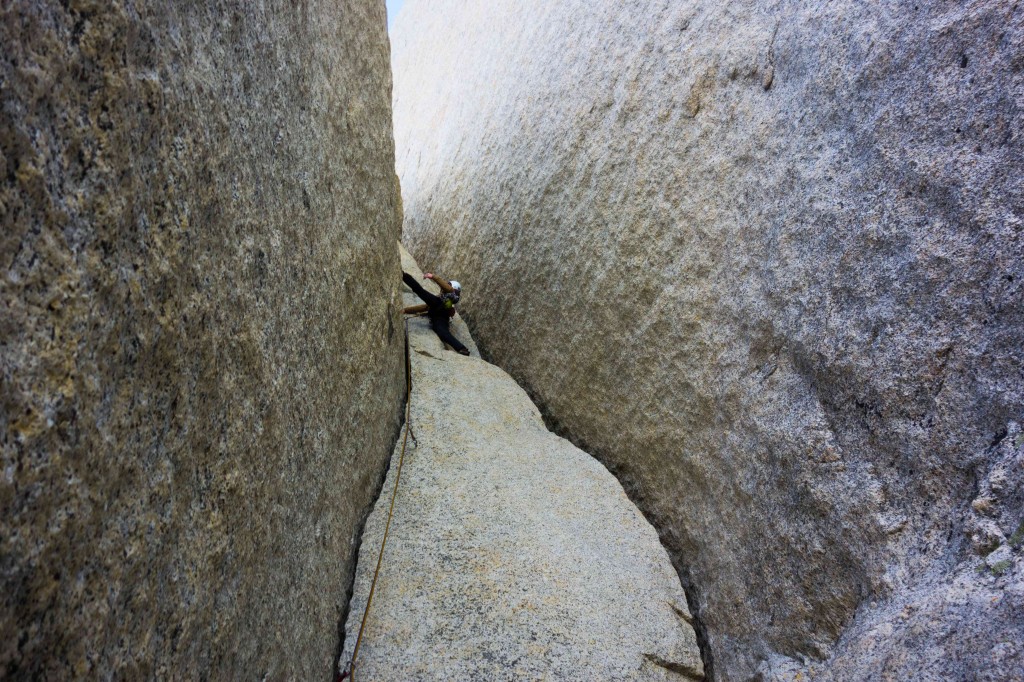 In Chaltén, I’m surrounded by the world’s best climbers. Some are amazing and Not Famous, like Bryan Gilmore, but many, like Josh, Colin and many, many others, are Famous: I bouldered badly while Fred Nicole sat with his wife, watching passively and smoking cigarettes, power emanating from his forearms in waves. I spotted Hazel Findlay on some boulder problems and was careful in a way that I would never be spotting a male climber:

I saw Ueli Steck at the ice cream shop, walking a pretty normal speed. Me and Rolando Garibotti have developed a fun rapport, spending most of our time verbally assaulting the other’s virility. I called Dave MacLeod a pussy to his face for no reason other than just to say that I did. It turns out that the almost-awkwardly kind Welsh guy in my hostel has done quite a number of climbs that someone thought fit to rate 5.14d. And the list goes on and on.

Perhaps unsurprising to everyone but me, I still haven’t gotten any amazing insight into what it requires to be a Hard Climber. But I heard Tommy Caldwell is getting here in a few weeks. Maybe I’ll ask him.

Seth Adams blogs at Seth’s Blog, Purer and More Essential Than Yours. Trust us, it’s funny.

This is a popular Argentine cartoon that I found taped to the counter at a deli in El Chaltén. The main bubble says “we’re not interested in what you’re going to say because you’re not famous.”
Alas, I often feel like the dejected speaker when I see how many hits my blog gets compared to Colin’s blog.