The Freedom Mobile by Luke Mehall 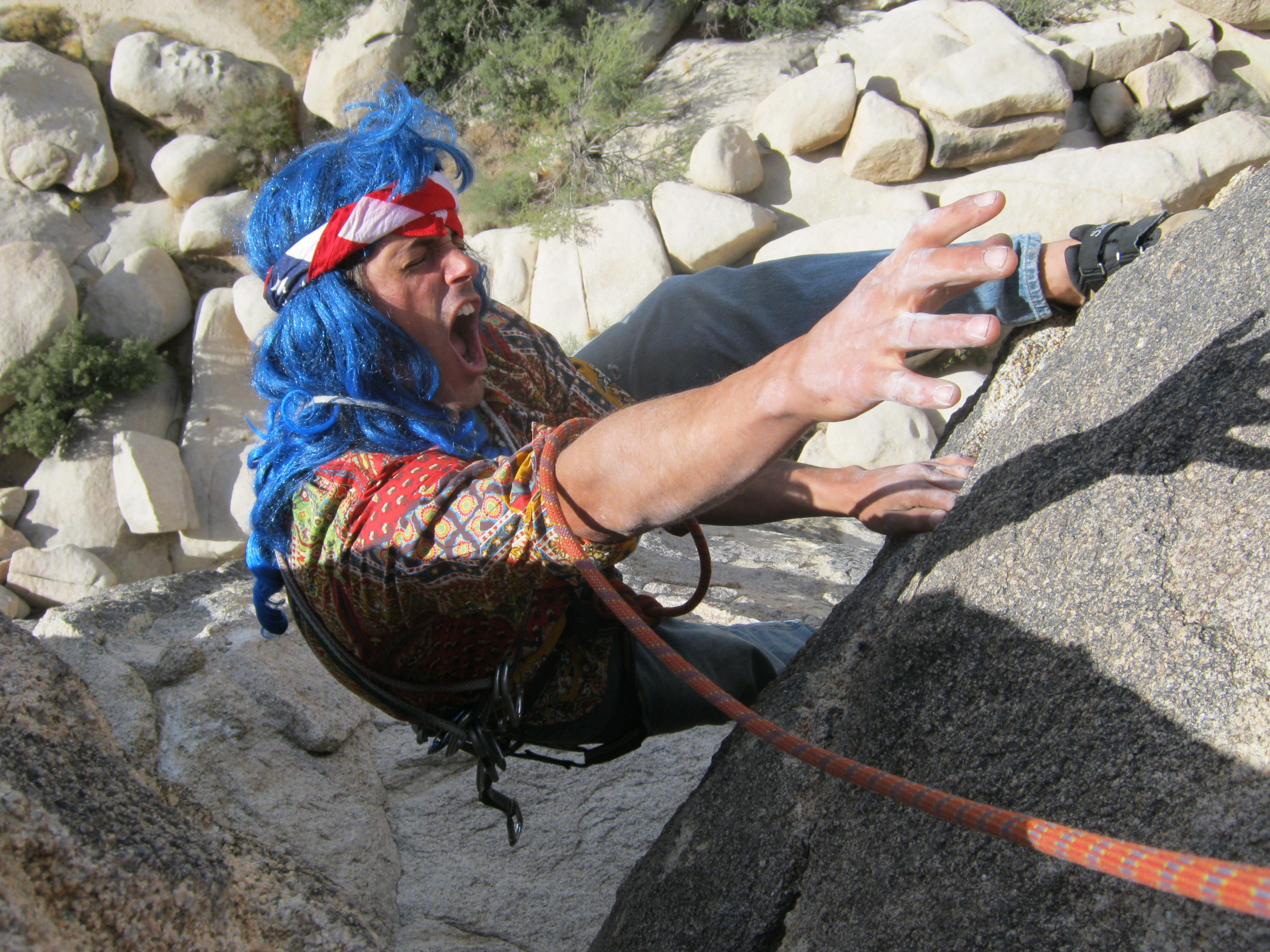 Our vehicles make statements about our lifestyles, and in the mountain town of Crested Butte, Colorado there is quite the diversity in modes of transportation. From the high class Hummer SUVs to the old Subaru station wagon that checks in well over 200,000 miles, the car we drive can be a dead giveaway to the activities we pursue. I often wonder what strangers think of my car, an old 1988 Mazda that is spray painted red, white and blue, most commonly known as The Freedom Mobile.

Ever since I saw the classic 1969 American road movie Easy Rider with Peter Fonda and Jack Nicholson, I’ve wanted to paint a vehicle in the colors of our country. I’ve always sensed that us mountain folk are living out our own version of the American Dream up here in the Gunnison Valley, and my car is representative of our unique culture. Adding to the mystique, I also wanted to feature the OM symbol, to show that the east and west can come together. To represent that I am a proud American, who has also been heavily influenced by the ancient, Indian based art of yoga. 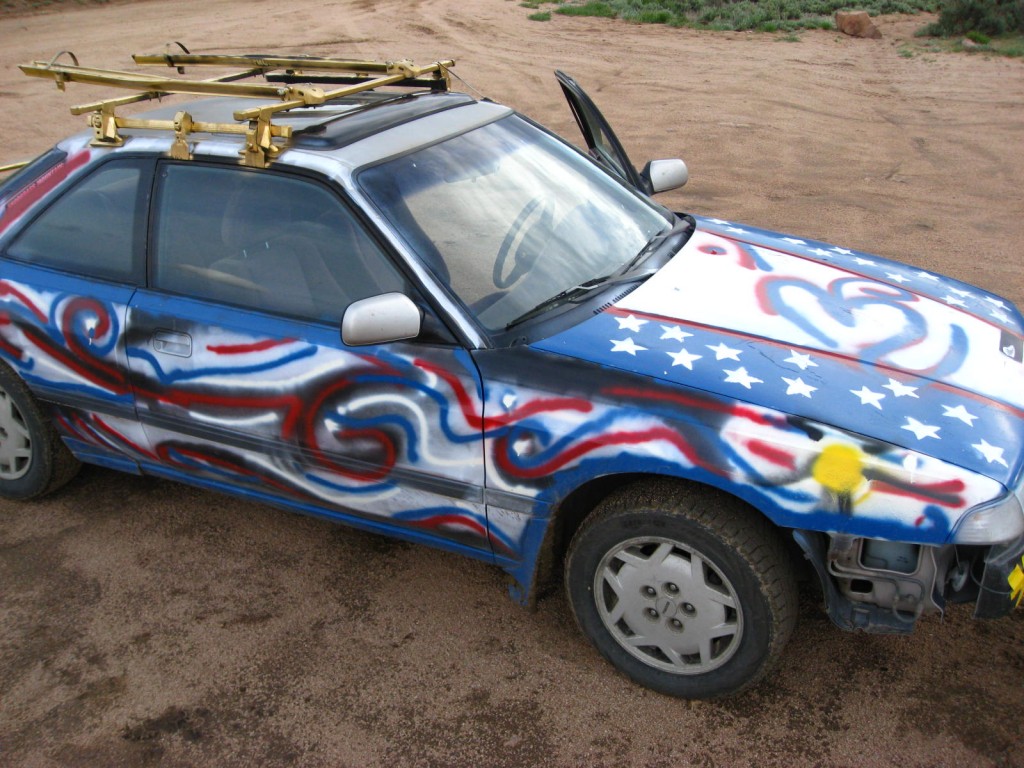 Reactions to The Freedom Mobile have been mostly positive since I graffiti-ed it up with my friend and artist, Nathan Kubes, three years ago. I can count on children smiling and pointing at it, supportive nods from people on townies crossing Elk Ave., and my fellow climbers saying, “I love your car” at various locales across the west. The most predictable response, however, is from hitchhikers, as I slow down to pull over. Their response, with a glimmer of hope in their eyes, is something to the effect of, “I knew you were going to pick me up.”

I’m proud to drive a vehicle that elicits such a response. It took some time to get to this level of pride, though. The very next day after we first painted the car, I was pulled over by the police, saying something about my headlights not working properly. I thought they were, and wondered if I’d just set myself up for getting pulled over all the time. It took some time getting used to driving a car that attracted such attention.

A couple months later, I had a first date, at the Almont bar of all places. (The woman was living in Crested Butte, and I was living in Gunnison; a good midway meeting point I thought.) I had the usual butterflies of a first date, and as I walked out to get in my car for the drive, I wished to the heavens that I hadn’t painted my car in such an outlandish manner, so I could just present myself in somewhat of a normal way. She ended up loving The Freedom Mobile though, and I learned an important lesson that our inner freak is usually a beautiful thing, and we should not hide it; if someone is a kindred spirit they’ll love what is inside you.

Something I did in the Freedom Mobile, that I never dreamed would happen, was taking it on a major rock climbing road trip, across the Western United States. It all went down like this. I’d just lost my full time with benefits job in Gunnison, with the downturn in the economy, and recently broken up with the first woman I’d ever been in love with. I needed to get out of the valley, and I’d made plans to move down south, to Durango for a fresh start. In the interim, my friend Dave and I would take a month long road trip. It would be one of those coming of age trips to do something exciting, and forget about the trials and tribulations of the past.

At the last minute, Dave’s truck broke down, and now the trip relied on The Freedom Mobile. With nothing to lose, I decided to take Freedom on the trip. We drove to Red Rocks in Las Vegas, Nevada down to Joshua Tree, California, up to Yosemite, to Vegas again, and finally down to Durango.

There were many moments of pure bliss, and the country’s reception of The Freedom Mobile was incredible. At one moment, driving in southern Utah, a woman sitting shotgun in an old truck, with oxygen hooked up to her nose, pulled up next to us, and gave the biggest grin I’d ever seen, and two thumbs up. Later that same day, pulling into a gas station in the Middle of Nowhere, Utah, some good ol’ boy mechanics were staring us down. We were slightly defensive until they started talking, “Nice car, it looks like something Evil Knievel would drive.”

Durango ended up embracing The Freedom Mobile, and there are more spray painted cars there per capita than any other place in Colorado I’ve been. Work ended up being scarce in Durango, as it is many places in our country these days, and when the spring ended, I found myself returning to Crested Butte for the summer.

The Freedom Mobile made its first appearance in Crested Butte’s Fourth of July parade, and somehow I managed to convince sixteen of my closest friends to spell out The Freedom Mobile in body paint across their stomachs and chests. The wildest incident, though, came later, in the fall, as the deadline for this piece was approaching.

I’d teamed up my friend, Braden Gunem, to do a photo shoot for this article. He rigged up a camera on the front of my car, with all sorts of lighting inside; including a small rag in a bottle he wanted to light on fire to add a wild touch to the photos. While we were keeping our eyes peeled for the police, I looked up to the last rays of daylight to see a major townie takeover headed our way. I couldn’t believe my eyes. It was the Brick Oven Pizzeria’s softball team, dressed complete with their signature red, yellow and green tank tops, and hairnets on their townies; thirty of them, followed by a police officer.

As we watched it all go down, wondering what was going to happen, the police officer ended up escorting the Rasta Hairnet townie takeover down Elk Ave. Only in Crested Butte! With the police busy escorting the wild Brick Oven crew, we commenced with our unorthodox photo shoot. The result was the cover shot for my first book. 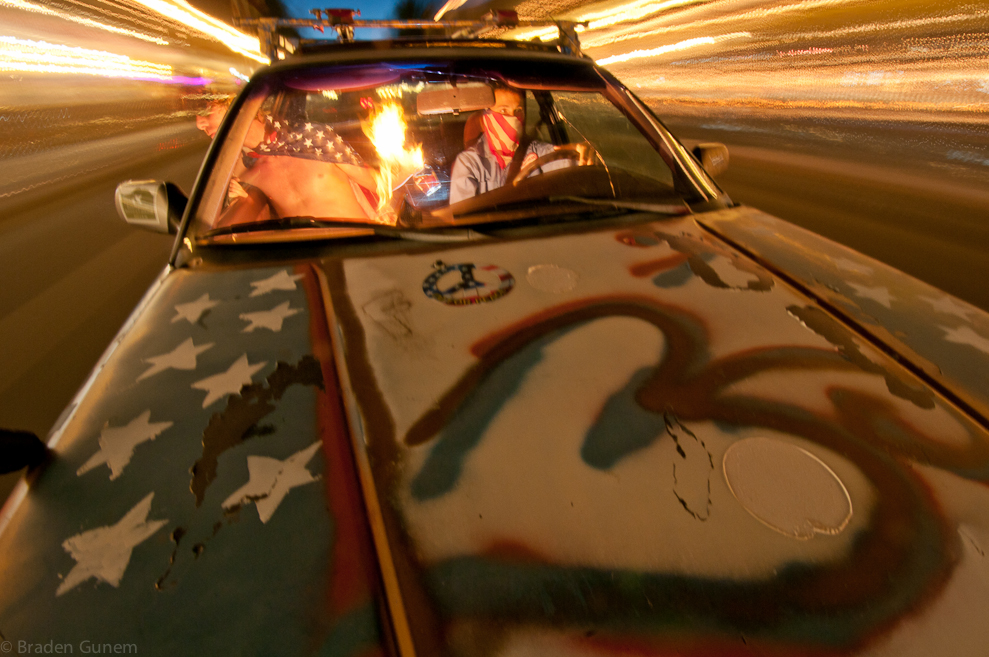 A version of this piece was originally published in the Crested Butte Magazine, Winter 2011-12. The piece also appears in Mehall’s first book, Climbing Out of Bed.