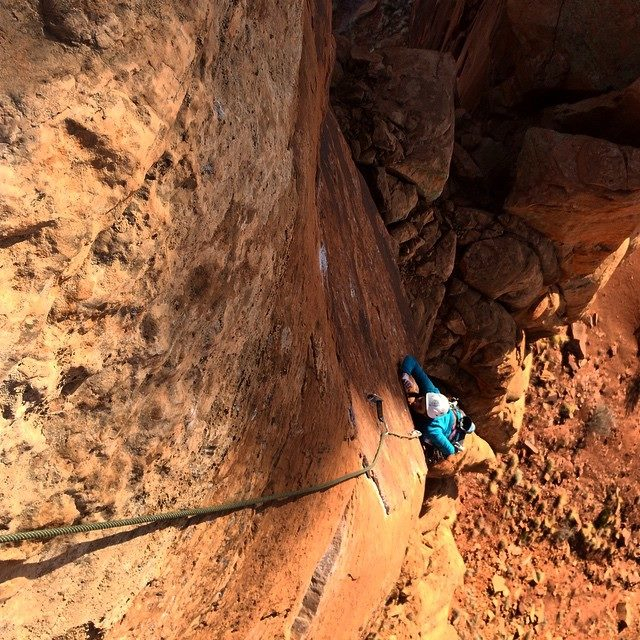 We arrived to Creek Pasture past midnight to a deafening stillness. Unable to locate our friend’s campsite, we perched our cars at an empty parking lot and fell asleep in the backs of them, exhausted after the nine-hour drive. I wore my long johns since the desert air seeped easily through the car door.

I wasn’t supposed to be there. I was supposed to be saving the world by teaching people about economic freedom in Rwanda, like I’d planned since my sophomore year of college. Instead, I was in the back of my car in the middle of Utah. 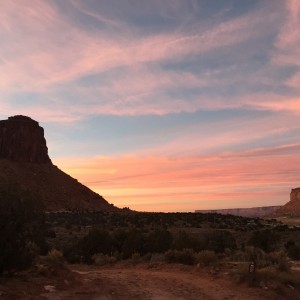 I woke up just as the sun peaked its head over giant sandstone structures that had appeared out of nowhere. They rose like great gods from the earth, each with its own spirit and enormity. The silence was still there, but it was an energetic silence. As the sun woke up the rock, illuminating it with amber and crimson, climbers began to emerge from tents in the campsites nearby. I’d never been to the desert before. There was so much emptiness, yet vitality flowed through these monstrous stones. It reminded me of waking up in Tanzania, looking out my hostel window for the first time to a view of Mt. Kilimanjaro wrapped in a halo of fog. Except in Tanzania, my objective wasn’t to climb and Kili was just one stop on my way to another city.

My friends weren’t awake yet, so I took the chance to inventory the piles of stuff in my car. First, a mound of clothes. Unsure which were clean, I did the smell test without much success. I guess clean is relative to the number of days you’ve spent in the desert anyhow. Is it dusty? Clean. Is it sweaty? Clean. Is it soiled with food or an unexplained substance? Probably still clean.

I folded the clothes and put them in a plastic bin. I rolled away my sleeping set-up so I couldn’t crawl back into bed and took out my climbing pack to organize my gear. It was my first time sleeping in this car. I’d spent months searching for a used Honda Element, eventually buying one back home in Oregon so I didn’t have to pay sales tax. In the coming months, I would completely outfit my car for living in – I’d build a bed platform and a nightstand. I’d set up a cargo net on the ceiling for clothes and buy every different size of plastic bin to try to Tetris-fit the most amount of storage. I’d make barely functional curtains to hide my slumbering figure for sleeping in places I wasn’t supposed to be.

Within an hour, we were all up. We rushed off to other campgrounds to find friends, leaving a shimmering dust cloud as the morning light chased us down the pavement. A note stuck to the Beef Basin information board told use our group of friends was in Site 7 at Bridger Jack. We followed a road so full of divots and drops that it almost seemed someone had fashioned it that way to keep away the riff raff. We found the site, still lifeless at 8 in the morning. Having adjusted to the Creek, our friends were on desert time. Wake up when your body feels ready, make breakfast before it’s hot out, climb until the sun goes beyond the other cliff or until your partner is ready for a drink. I was jealous of them, able to turn off their compulsion for productivity so they could enjoy the way the hazy morning light feels on cold cheeks. But it wasn’t long before I’d succumb to desert time myself. In fact, the longer I spent without cell service in Indian Creek, the better I became at letting go of expectations in all forms.

We constructed hearty lumberjack breakfasts of farm eggs and thick maple bacon, the smells of which were almost more satisfying than the meal itself. Figures began to appear out of the bushes where they’d hidden tents to shield the noises of partying from the night before. I introduced myself as the Boulder-girl to people I didn’t know. Or should it be the Oregon-girl? Or Rwanda-girl? I’d been so many places in the last four years. I wasn’t quite sure who I wanted to be in Indian Creek. Maybe one day there’d be an Indian Creek-girl.

This journey to the Creek was no less than a pilgrimage for me. I’d been climbing for just a year and a half, 9 months of which had been spent scraping my fingers on plastic holds in a bouldering gym. Indian Creek had been the fantasyland that inspired me to get outside. Well, not really the Creek, but a woman who calls it basecamp – Steph Davis. She is the only real hero I’ve ever had. The heroes of my childhood all turned out to be less cool than I thought. They were materialistic or famous for something they didn’t actually do. Steph is real. A professional sponsored athlete who, at one point, lived in her car. What other sport, besides maybe skiing and surfing, would a professional athlete live in her car? And she is rich in a way I want to be rich, wealthy by living below her means. In reality, it’s that community who has accepted her lifestyle and helped to make it happen. I was in Indian Creek to find that community.

We drove to the crag in cars stuffed with people and gear. I studied my journal, which was filled with the names of routes people had suggested to me in the weeks before the trip – Supercrack, the Incredible Hand Crack, Generic Crack – their suffixes warning me of a rough day ahead. The journal was the same black Moleskine in which I’d hand-drawn a map of Rwanda with colored pencils before deciding not to go.

We were the first ones in the parking lot that morning. Packs loaded with all the gear we owned, we trudged up steep choss. Three different people tried to teach me how to make tape gloves, but I messed them up anyway. Since I was the only newbie, advice on how to climb cracks was thrown at me from every direction. Twist here, clench that, put your thumb there. I just closed my eyes, pictured Steph and tuned them out. I was sure my body would know what to do.

Then we climbed. Shoving fists and hands and feet into cracks to pull ourselves up, to move ourselves forward. It was so pure. I’d never felt so entwined with a cliff, our silhouettes melting together from a distance. My grunts echoed through the canyon as I struggled up routes two grades below what I normally climbed. I bled, but it didn’t matter. That day, the sun warmed the rocks as we played amidst them and I felt at home. 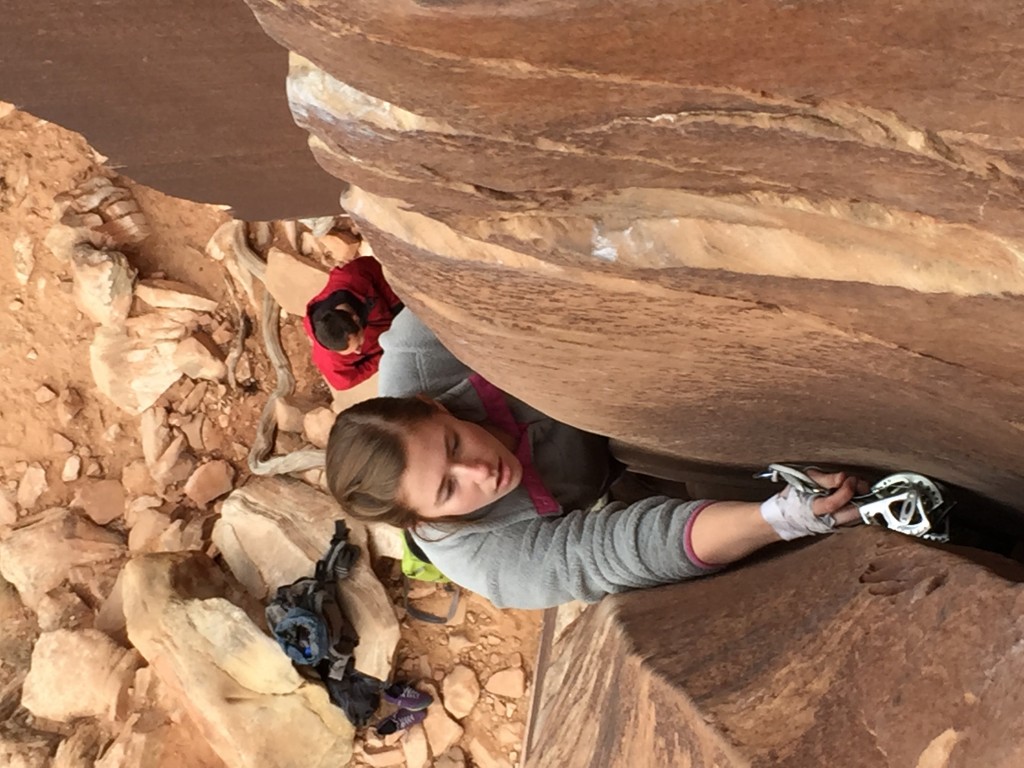 The author leading at The Creek.

Some people in my life don’t understand how I can choose rock climbing over most everything else. I spent my whole academic career, 16 years of it, working towards the job in Rwanda, the one I gave up to be in Boulder and to climb. I’d gotten a full scholarship and straight A’s. I’d spent Spring Breaks in Africa and summers working internships. I’d written research papers and done consulting projects and damn near turned my whole life into bringing economic freedom to Rwanda. Some people don’t understand how I can give up all of that to climb big hunks of rock. Maybe that’s because they’ve never spent a day in Indian Creek, running wild amongst sandy giants, tapping in to the very energy that keeps this universe going.

One day I might try to save the world, but right now, I’m just trying to explore it.

This is Madeline Pickering’s first piece for the Zine. She is an Oregon girl, about to embark on a life of living on the road, and climbing in the places she’s heard so many stories about.