Rogue Hoes and Gargoyles; Trail Building in The Creek by Luke Mehall 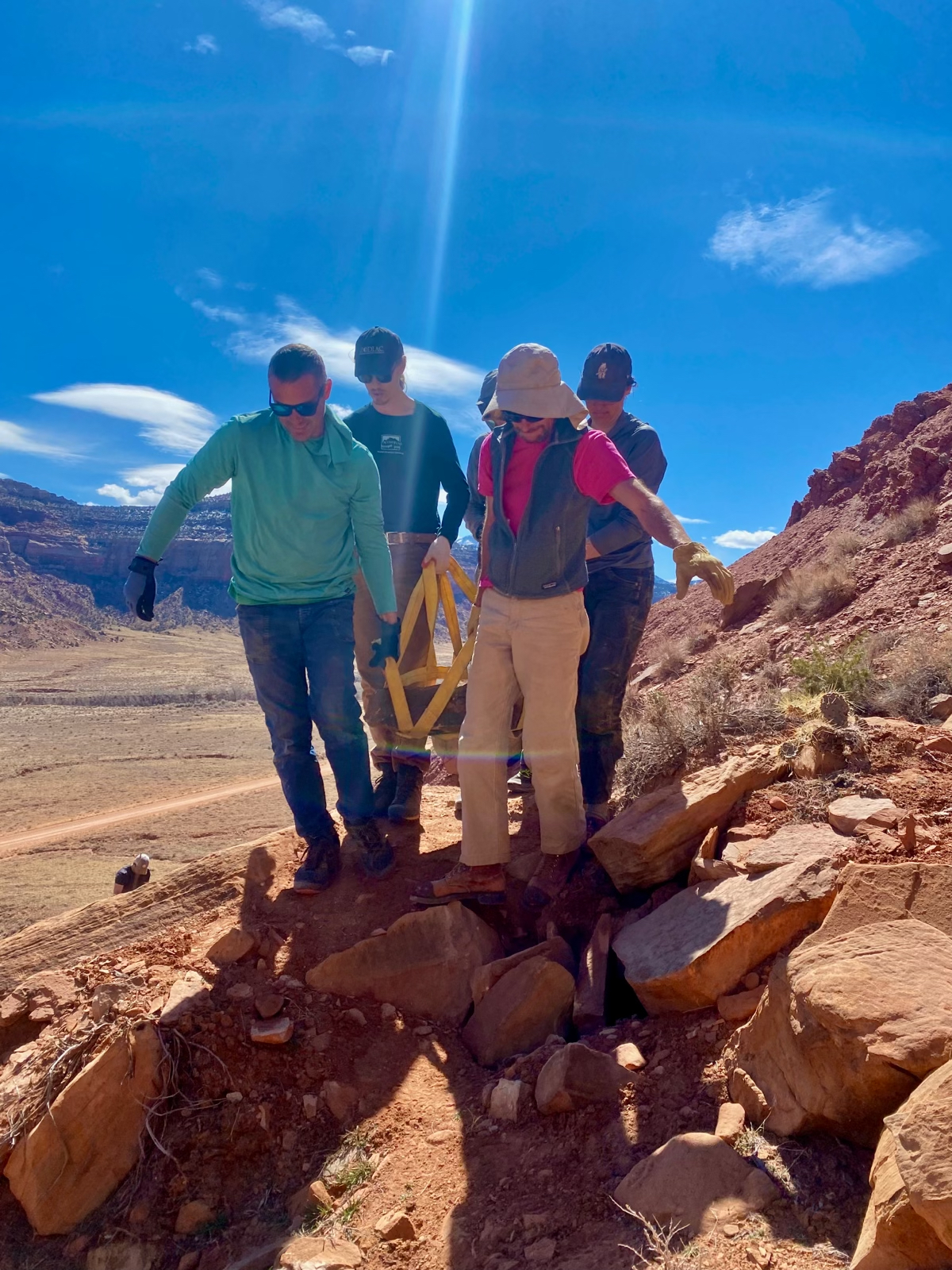 If there’s a hill I’m willing to die on, it’s in the land we call Indian Creek, a part of Bears Ears National Monument.

With all the insanity in our country during the past five years, I’ve really focused on this single place. Like many outdoor athletes, I am an obsessive. I need something to be obsessed about, something healthy to pour all my energy into.

Usually out there it’s all about climbing, camping and friendship, but last month I had the opportunity to help out with some trail building, led by the Access Fund.

by Luke Mehall, photos by the author and Andrea Hassler (Note this article was originally published in the Durango Telegraph.)

Since I started climbing more than two decades ago, climbers have largely evolved from an outlaw misfit group to one that gives back to our public lands and works closely with government agencies and tribal leaders to do so.

The original climber trails up to the walls of The Creek are almost all fatally flawed. They usually go straight up the hillside and become victim to erosion when big storms roll through. This is bad for the hillside, as well as potentially those hiking up. Once, my trail guru Tim Foulkes, who spent years on trail crews, got off route on our way up to the Scarface Wall, slipped on a rock and tumbled backwards. It was one of the scariest experiences I’ve had out there, in a situation that shouldn’t have been dangerous at all. (He escaped with a cut on his hand, which ended his climbing day, but otherwise he was OK.)

Years later, both Tim and I volunteered with the Access Fund to help build a beautiful, erosion-proof staircase trail up to the Scarface Wall. While helping out, I developed an immense admiration for the trail crews that spend months on these trails, building something sustainable one rock at a time.

Last month, the Access Fund was working on the Sparks Wall trail, another one that had become loose and unsustainable. Unlike the Scarface trail, which was in the middle of construction when I helped out, this one was just at the beginning stage of its rebuild. It was fascinating to see the process and all the considerations and materials that go into rerouting a trail. 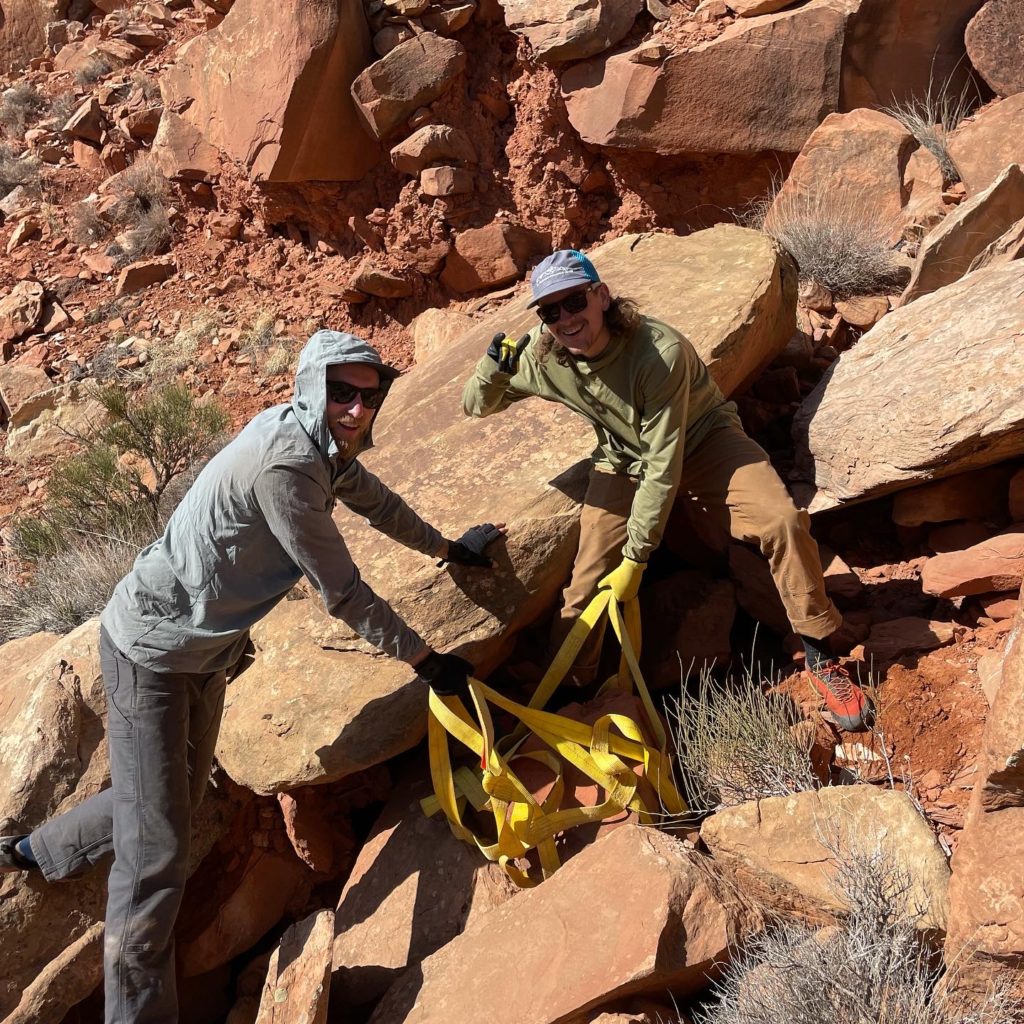 The first day, I was mostly helping out with a crew of six or so gathering large rocks for future steps. We trundled rocks down a hillside – avoiding killing plant life and cryptobiotic soil – and then carried them over to the trail using a large, webbed netting called a rock carrying device. It was a heck of a workout and gave me more admiration for those who do this day in and day out, often climbing after their work day.

The second day, I was lower on the trail, right at the beginning. At the guidance of my friend Andrea, who works for the Access Fund, we were decommissioning the old trail. Again, this process was super interesting. We used rocks referred to as gargoyles to block off the trail, digging up the soil so it would revegetate faster. Fun fact: the tool I was using to do this was called a rogue hoe; trail-building tools have the coolest names, and it’s always fun to pick up new slang.

We also cleaned up an overused fire pit, with nails and micro trash in it, and built a proper start to the new trail, which will be a work in progress for the next year or so. These trails take a lot of time, but, in the end, they are a work of art (and hard work).

This experience was super important for me to zoom in on and get my hands dirty. As a writer who works on a computer, it’s easy to get pessimistic about things, including Bears Ears National Monument, which seems to be stuck in a political game of football. At the moment our team – the one on the side of conversation and preservation – has the ball, but things can turn quickly.

Just a couple weeks ago, it was announced that the Outdoor Retailer show will return to Salt Lake City. (It left a few years ago to Denver in protest over the Trump administration’s massive reduction in the size of Bears Ears, a move supported by the governor of Utah.) The return drew the ire of the Bears Ears Inter-Tribal Coalition and other businesses like Patagonia and REI. Politics aside, I like the show better in Salt Lake than Denver, but, as The Dude says, that’s just like my opinion, man.

Recently I was listening to an interview with climber Tommy Caldwell on the “Enormocast” podcast, hosted by my friend Chris Kalous. I also recently interviewed Tommy for my “Dirtbag State of Mind” podcast, and it was cool to hear questions that Chris asked him that I didn’t. But one statement in regard to environmental issues stood out over everything else: “The fight is never over.”

So, whether it’s a fight against erosion through trail building or the fight to protect Bears Ears in the political arena, let’s all keep digging in and fighting the good fight.

Luke Mehall is the publisher of The Climbing Zine, and host of the Dirtbag State of Mind podcast. He is also the author of five books, including The Desert, and American Climber. This article was originally published in the Durango Telegraph.

Check out more of the Accces Fund’s work at their site: https://www.accessfund.org/