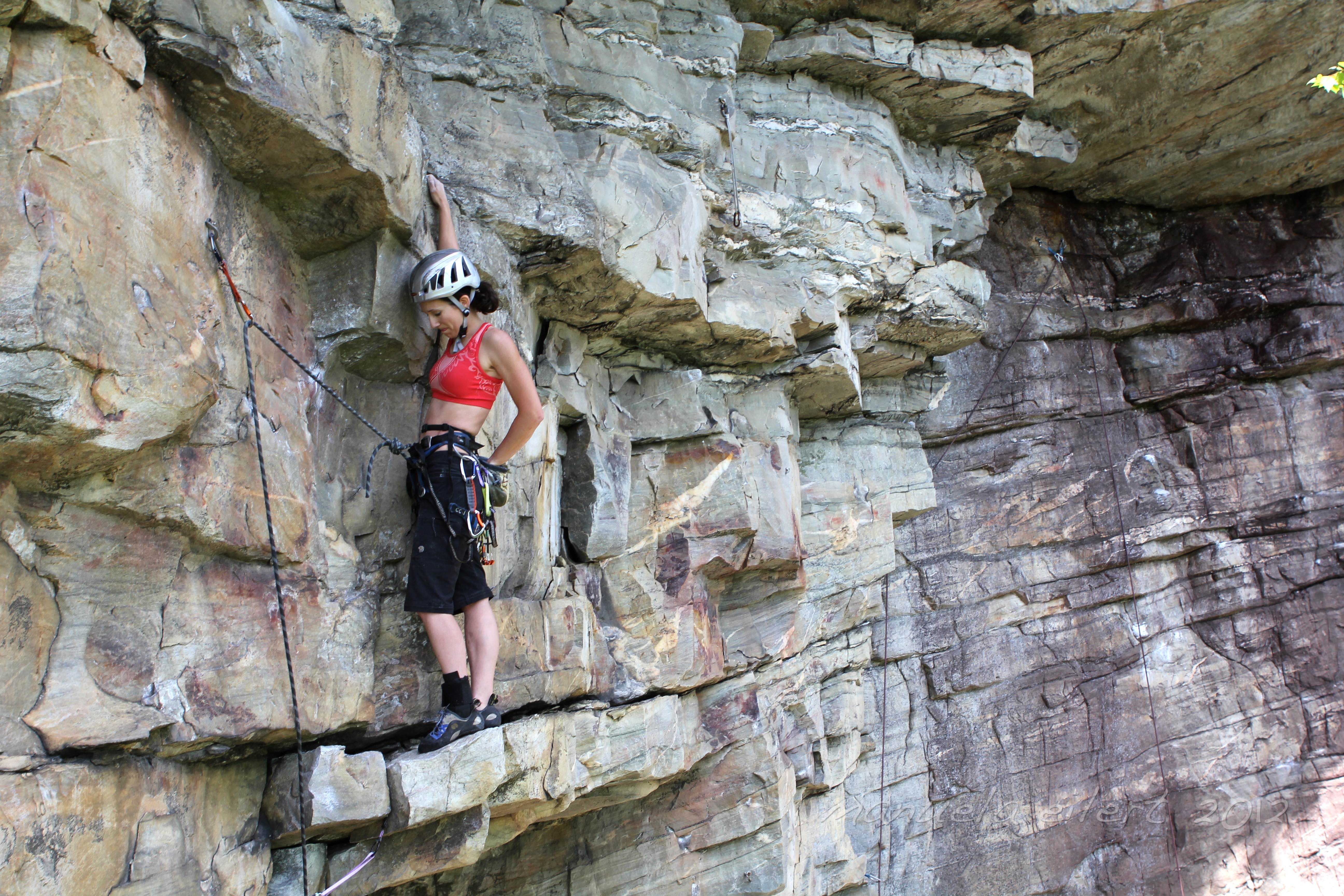 Some of you may be familiar with my quest for “Twelve 5.12′s in 2012″ this year. For those of you that aren’t, here’s the skinny. At the tail end of last year I managed to eek my way through my very first 5.12a (TKO at Crowder’s Mountain) for the send.

With one under my belt, the next logical step was to establish myself a little more firmly within the 5.12 grade. I figured averaging one per month would be a reasonable expectation. Plus, twelve 5.12′s in 2012 kinda had a nice ring to it! I knew some routes that catered to my strengths might go in just a few attempts, whereas others that exploited my weaknesses might shut me down despite an untold number of tries. What I didn’t know was that I was going to end up out of commission for all of February and March due to a broken ankle. There was more than a time or two where I thought perhaps my goal was too lofty and I’d bitten off more than I could chew. But despite all the unforeseen hiccups here and there, I was able to wrap up my goal this past weekend on my local turf at Crowders Mountain!

Here’s a list of the dirty dozen, in chronological order:

1. Welcome to Crowders 5.12a – (January, Crowders Mountain, North Carolina). Ironically this route is right beside my 1st. 12, and went in the same number of tries (4), but it couldn’t be any more different. This one probably doesn’t have a single 5.12 move on it, but every single move feels like upper 5.11.

2. Low Brow 5.12a – (April, Meadow River, West Virginia). Toproped this one on my first day back out of my ankle boot, and came back the next weekend and sent it on lead. This one might be one of the most unique lines on my list.

3. Slabster’s Lament 5.12a – (April, Hidden Wall, North Carolina). This one gets the prize for most memorable, hands down, as I had been one move away from a send on it 10 weeks prior when a funky fall caused my ankle to go snap, crackle, pop. It felt good to come back and get this one packaged up and sent.

4. Pockets of Resistance 5.12a – (May, New River Gorge, West Virginia). This one was supposed to be my first 5.12 last year, but it kept spitting me off at the last move, so redemption on this route was the perfect Mother’s Day present!

5. Blind Prophet 5.12b – (May, Pilot Mountain, North Carolina). This one took a ridiculous nine attempts to send, and it wasn’t until the 4th that I actually made it all the way to the anchors. Apparently 12b is harder than 12a. Go figure.

6. Last Glitch Effort 5.12a – (June, Boone, North Carolina). This route was tailor made for my climbing style, and I was shocked that it went down as quickly as it did.

7. Freaky Stylee 5.12a – (June, New River Gorge, West Virginia). This one really pushed my physical and mental limits, and has since become the gold standard by which I measure my lead head against. It was truly awesome, but I probably won’t ever get on it again.

9. Homerectus Direct 5.12a – (August, New River Gorge, West Virginia). It’s near impossible to send hard during Southeastern summer humidity, but this one move wonder crux went down during a freak autumn-like day in the middle of August.

10. Bullet the New Sky 5.12b – (September, New River Gorge, West Virginia). This one is my favorite of the ones on the list. If there weren’t so many other great climbs at the New, it’d be worth getting on every time I went up there. Spectacular arête climbing – this one took four tries over the course of back to back weekends.

11. Hardcore Jollies 5.12a – (October, Red River Gorge, Kentucky). Kind of un-Red like, but fun nonetheless. Another one with the crux right off the deck.

12. Fashion Direct 5.12c – (November, Crowders Mountain, North Carolina). It was neat that #12 went down at my home crag, and it’s only fitting that the last one would be the hardest one! This line is definitely a test of brains and brawn (and if I were a guy…balls.) A desperate crux down low on crimpers that bite back to a nice rest, then a loooong, intricate upper crux sequence. The upper crux started with a delicate traverse and heinous razor blade crimps and culminated in a very committing move with big whipping potential. My warmup actually shared anchors with this route, and the pucker factor made it too tempting to resist working the moves out on toprope first. The upper crux was feeling good after two toprope burns, but I still felt desperately lost on the lower section. So on my first lead attempt I was expecting to thrash around on the bottom for a while, but amazingly enough I made it through that section clean. I danced around for a little while trying to get my hands right on the traverse, but once I was through I felt strong and powered straight through to the next clip. The rest of the climbing is only 5.10, but it’s pretty darn run-out, and I was feeling adrenalized so I had to consciously make myself slow down and not do anything dumb.

Woo-hoo! Twelve 5.12s are done! It’s not only been a fun ride, but also quite the learning experience. The good thing about having a long term goal was that it kept me focused and motivated throughout the whole year. The bad thing was that a couple of times I put too much pressure on myself to perform, and when that happened I would forget to have fun (which is a shame, since climbing should be fun regardless of whether I send or flail). So what’s next? Vegas, baby! More to come on that next week, but I will say that it involves me getting high (off the ground) with my hubby in the Mojave desert! 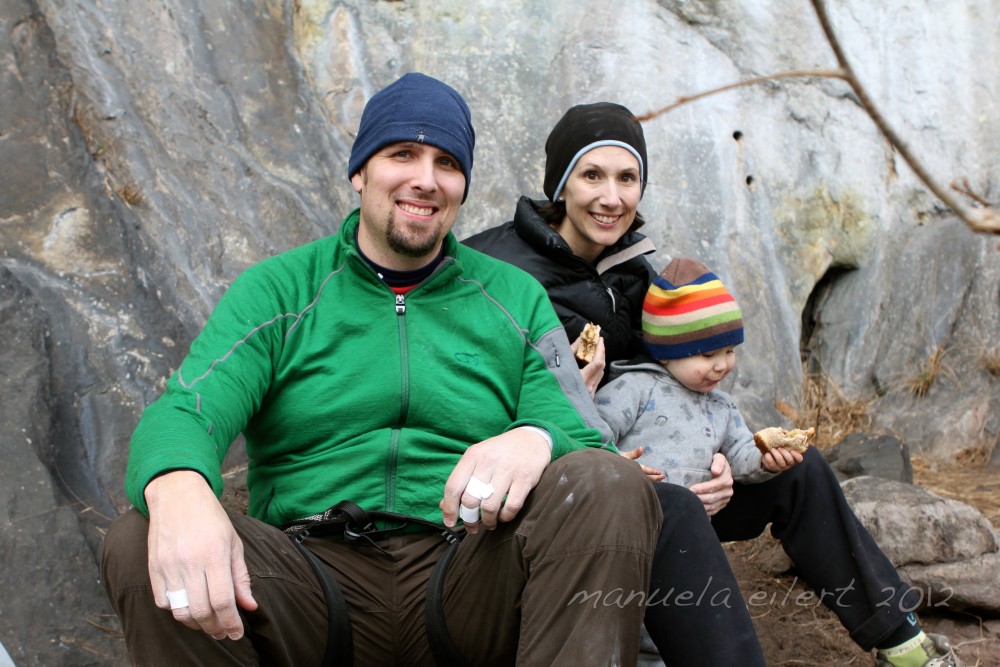 Erica Lineberry is the author of the Crag Mama blog. Check out more of her writing at www.cragmama.com.