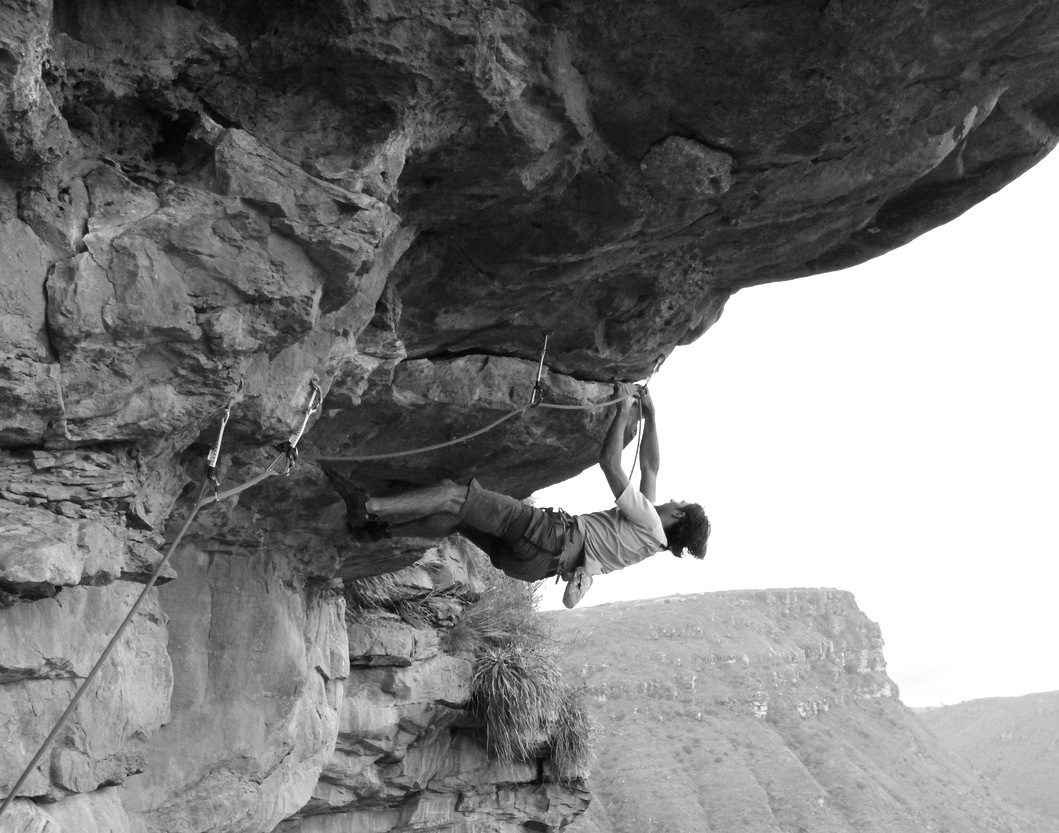 I’m sweating in the Colombian sun as I reach for a big flat hold on inverted sandstone. I clip a bolt and move onto a lower angle section. The shenanigans from the previous evening are dripping out of me and onto the red rock below. In a sudden moment of terror and confusion I feel five sharp objects enter my skull with piercing pain and sudden swelling.  “Lower! Lower!” I frantically yell grabbing the draw below me to get tension. Locals, friends, rush in to see what the gringos are yelling about.

This piece is an excerpt from Volume 5, The Dirtbag Issue (out of print)

As I lower to the ground I hear, “I brought the medicine!” Richi, the co-owner of Refugio La Roca (a killer spot to lodge right next to this crag) shouts as he sees me rubbing my head.  “Now get back up there and complete the route, don’t let those bees win, Colombian Policy!”

“Colombian what?” I reply.

He persists pushing the much-needed meds into my hands. “Thanks?” I murmur.

He’s a kind and thoughtful guy that crushes 5.13s for breakfast so I listen up. The stings have me a bit shocked so I try to ignore the discomfort by thinking of how I got into this mess.

Plain and simple, I came to Colombia to escape. Escape the settled life I have come accustomed to in my job, relationship with my girlfriend, and home in Yosemite National Park. Don’t get me wrong, I am very happy. Let’s not confuse an itch for an injury, but settled for 12 months a year is a nightmare, as far as I’m concerned. When my buddy Keith Brett suggested going to Colombia for a month of climbing, I couldn’t buy my ticket fast enough. I hate being in one place for too long. I collect too many things, become complacent, and lose excitement that so many of us wondering souls seek. So when the idea of having no responsibilities and climbing in Colombia came up it was an obvious choice. Ditch the responsibilities and just climb. 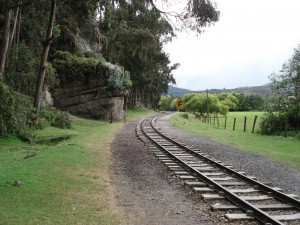 We are in La Mojarra, a climbing area in the middle of the country with well spaced bolts and a few cracks on overhanging shelfy sandstone. A not so incognito gentlemen’s establishment and bar are located right at the entrance to the crag, and it is too hot to climb until about two in the afternoon every day. Richi and his wife Alex have become our new best friends and we climb, eat, share stories and photos, and talk about life together. We have climbed eight days on and a sustainable coffee tour is in the plans to rest our throbbing forearms. Richi and Alex have just bought this cute and inviting hostel. They can’t climb as much as they would like (everyday) due to the work it takes to run a business, but they make it out a few times to share the classics. 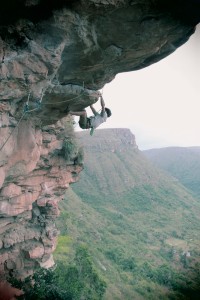 Keith Brett sending in the La Mojarra climbing area near Mesa de Los Santos, Colombia. The area is part of the Chicamocha Canyon, the second largest canyon in the world, next to the Grand Canyon. photo by D. Scott Borden

Richi is a dirtbag by my definition; anyone that does whatever they can to maximize the amount of recreation in their life. A dirtbag will eat out of a dumpster if it means they have more money to buy gear. They will live in their van if it means they can live right next to paradise. Richi lives and breathes climbing. From putting up the infamous La Espana (5.13) to crushing every bouldering competition he enters, Richi is a lifer. He spends all his disposable income on new shoes, bolts, chalk and other gear. When asked which routes at La Mojarra he wants to climb on a particular day he responds enthusiastically “all of them,” without a hint of sarcasm. He loves climbing. It’s in his blood and it isn’t coming out.

And yet there are the normal responsibilities in his life that inevitably creep up as we grow older and keep us from climbing every day: a wife, his extended family living down the street and a new business. He seems to be tiptoeing the line between dirtbag extreme and dirtbag lite. The same daunting question I am avoiding by fleeing to the Southern Hemisphere. And, this isn’t the first time I have noticed this phenomenon during our trip.

Rewind two weeks: Keith and I are roping up in the Sandstone Witch and Spanish Moss infested Suesca outside of the country’s capital, Bogota. With over three hundred routes up to three pitches in length, mostly mixed and a bit spicy, this is the country’s most developed and visited crag. “I once met a witch here and she had the nose and everything,” a Colombian friend told us. “She laughed hysterically and I was terrified!”

We didn’t meet any witches, but we did met one of the chillest dirtbags around, Sebastian.  In terms of type of climber, Sebastian is the South Pole and Richi is the North. A trad climber that prefers to top it out on jungley crumbly rock over taking falls. He is a self-taught and a self proclaimed, witty hippie with an amazing grasp of the English language. He even read the last issue of The Climbing Zine in one day. And that isn’t to say he doesn’t climb hard, he once onsighted a 5.12R trad route. But you won’t find him clipping bolts and whipping on overhangs like Richi (although Richi is a fine trad climber as well). You’ll find him moving up cracks with ease and patiently coaching his friends to climb harder. Our first few days in Suesca were spent climbing stellar three-star routes out of the misguided guidebook. 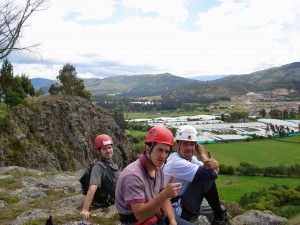 (L-R) The author, Sebastian Mejia Botero and another Colombia climber.

That was, until we met Sebastian. He pointed us towards the “classics,” runout and vegetation filled jungle cracks that made us wonder about this guy, until he took us to some actually good rock. Turned out he wasn’t messing with us or living la vida loca. He was sharing the climbs that showed the crag’s truest colors, no matter how mentally uncomfortable. Once while climbing above a poor piece I yelled down that I was going to hit the deck if I fell. “Keep it going, Colombian Policy!” he yelled back. Whatever the heck that meant.

He invited us over for coffee and conversation on a few occasions and we noticed he had a climbing wall, climbing literature exploding out of boxes, and climbing gear as his prized possessions. It was apparent he too had climbing clinging to his red blood cells. Like a mountaineer wearing crampons and picks dug in to those little sphere shaped blobs refusing to fall off. He, too, had the same dilemma with life’s responsibilities and climbing. Married and with a little boy, he was working as a climbing guide to make ends meet. It was that fact that made me infatuated with him and Richi. That and the Colombian culture I was growing to admire. 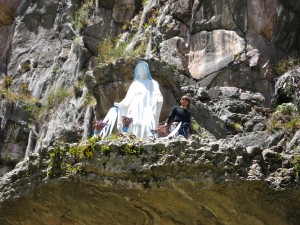 What struck me most about this place were the people: kind, laid back, warm, giving, proud, and generally interested in just living a comfortable and simple life. I read in a Lonely Planet guidebook that people here generally don’t want to strike it rich, and I would have to agree. They just want to be happy with what they have. It was easy to fall in love with these folks.

They encompass much of what it means to me to be a dirtbag, something that I desperately wanted to reconnect with in my personal life. It was, after all, the reason I jumped at the chance to travel to Colombia. And there was something about Sebastian and Richi’s responsibilities not really bringing down their dirtbag ways. I felt like there was something I could learn from all this to apply to my own life.

Their flow and continued dedication to the pursuit of climbing is inspiring. They may have been very different in their climbing but they could be brothers in their abilities to juggle responsibility and dirtbagging. These guys have families and jobs and still climb at least four times a week, and most importantly they seem genuinely happy. They seem to have it figured out as much as it could be figured out. 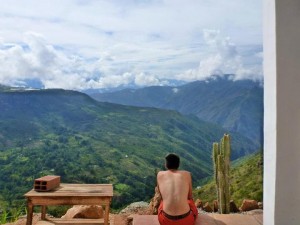 The lessons of Colombian Policy finally hit me on a plane ride from Bogota to Quito. As soon as I returned home, I proposed to my best friend, that wonderful girlfriend that didn’t blink when I told her I was going climbing internationally for a month. And I’m working on buying a house with her in our little paradise as I write this. I don’t have all the answers to this seemingly difficult conundrum: can you settle down and still be a dirtbag?

In Colombia, I gained hope and saw it work. A couple of dirtbags have inspired me to try to figure it out in my own life. The lessons I learned in Colombia still resonate with me today. Life is change and change is constant whether you are ready for it or not- there is no such thing as a sure bet. Uncomfortable things happen in life and you can decide to go with the flow or resist and hold out, but eventually they need to be resolved. And, if you can find the balance of living simply you will have more time for the things and people you love. In the end, all the quality climbing aside, that is what I learned from their culture and this trip, and I think that is what they mean by “Colombian Policy.”

This piece is an excerpt from The Climbing Zine, Volume 5. Check out Refugio La Roca’s Facebook page.

D. Scott Borden recently moved back to Gunnison, Colorado. He has been fortunate enough to climb all over the US and in Africa, Colombia, South America, Mexico, Thailand, and Canada. In June of 2013 he married Taryn Mead in Yosemite.