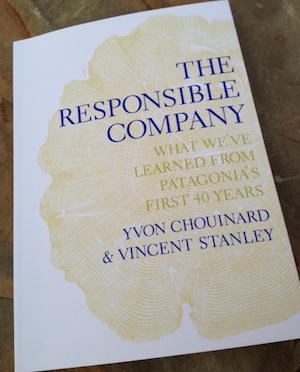 “Most people under forty don’t watch the ads placed on TV…they fast forward through the boring bits when they watch the show after airtime on a laptop. They get their news from Jon Stewart and then twitter it to their friends. And they have been raised to be concerned about the fate of the planet and want to support companies that are responsible.”

From The Responsible Company, What we’ve learned from Patagonia’s first 40 years by Yvon Chouinard and Vincent Stanley

There’s an incredible, simple truth that Patagonia has tapped into: customers will pay more and support a company that makes a good product and aims to do their business in an environmentally friendly way. In Responsible Company the wildly popular clothing company, is delivering a new, honest message that starts with this premise: businesses need to be honest and start using the word responsible instead of sustainable with regards to their environmental practices.

Written by Patagonia founder Yvon Chouinard, and longtime VP of their wholesale division, Vincent Stanley, this book chronicles the environmental actions taken by the company over the last 40 years, and sets a platform for other businesses to take similar actions.

Patagonia is a true dirtbag success story. Chouinard was one of the original rock climbing pioneers of Yosemite in the sixties, when dirtbags lived wild and free in Camp 4, and only a few people had ever climbed El Capitan. They were a generation inspired by the beatniks, and created their own counter culture, that has only grown in numbers to this day. He went on to found Chouinard Equipment, and they forged their own pitons for climbing. Later when the company realized the intense scarring that pitons caused they discontinued their use and introduced protection like hexes and nuts that didn’t damage the rock; the type of gamble that would set the tone for Patagonia in the future. Chouinard Equipment would later be sold and became Black Diamond, and Yvon founded Patagonia.

There’s a lot of brutal honesty is this book, and one thing that the authors do well is articulating the absurdity of our consumer economy, and its dependence on endless growth. “Poke your nose into any store in the mall and look around. Much of what we produce to sell to each other…is crap…We’re wasting our brains and our only world on the design, production, and consumption of things we don’t need and that aren’t good for us.”

Chouinard and Stanley argue that the economy as we know it now is going to evolve into a more post-consumerist one, one where people shop more for their needs, and less out of entertainment.

The other way they use honesty is admitting their own mistakes, and how they grew as a company by learning from them. One perfect example is their move to only use organic cotton. Much like Chouinard Equipment’s leap to move beyond pitons, they made the move with little data on how that would affect their sales. They simply realized the conventional cotton was too toxic and polluting, and could not ethically continue to use it. Again, this environmentally friendly move did nothing but enhance their popularity with costumers.

Another impressive effort by Patagonia that is covered in The Responsible Company is their Common Threads initiative to repair or recycle everything they produce. This began in 2011, fully implementing the “reduce, reuse, recycle” mantra, while also adding repair, and finally reimagine (a sustainable world). Encouraging consumers to only purchase what they needed over the holidays, later that year, they famously placed an ad in the New York Times on Black Friday, with a picture of one of their garments and a headline reading, “Don’t Buy This Jacket”.

Checking in at 123 pages The Responsible Company is a quick read, and could be consumed in a couple sittings. It will likely be enjoyed most by those who run businesses themselves, and are looking for ways to reduce their impact on the planet, while also saving money and resources at the same time. To cater to those readers the book has an extensive appendix of checklists that businesses can use to become more environmentally responsible.

All in all this is a solid effort to understand Patagonia’s success, and to see what the world could look like as we move towards post-consumer economy.

Luke Mehall is the publisher of The Climbing Zine, and the author of Climbing Out of Bed, a definitive collection of climbing and mountain town stories, available as an e-book on Kindle and Nook. A printed version will be available later this year. This article was originally published in the Durango Telegraph. More of Mehall’s writing can be found at his blog.