A Crack at the New Creek Season 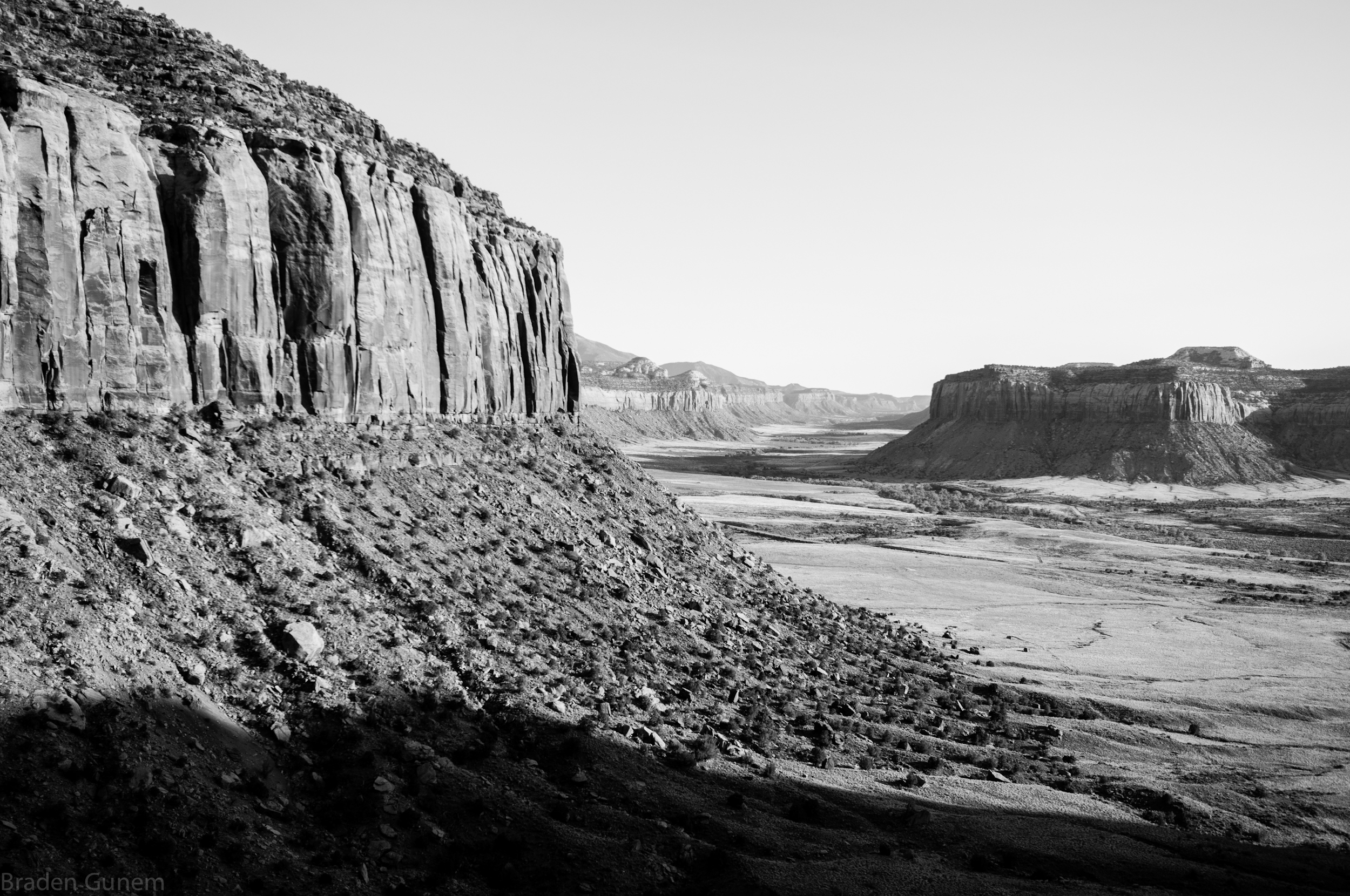 The first trip of the year to any beloved climbing area is exciting. It is a fresh start, a chance to see where you’re at mentally and physically, and it usually happens on the cusp of a new season.

Yes, spring is in the air here in the desert, and last weekend I made my maiden voyage of the season to Indian Creek, Utah. A short jaunt from Durango, Colorado, my buddy Tim and I woke up early, and hammered out the drive past the landmarks: Shiprock off in the distance, the Dove Creek Super-ette where the Mustache Lady works, and of course Monticello, Utah, where you always drive the speed limit because the cops love to pull out-of-staters over. 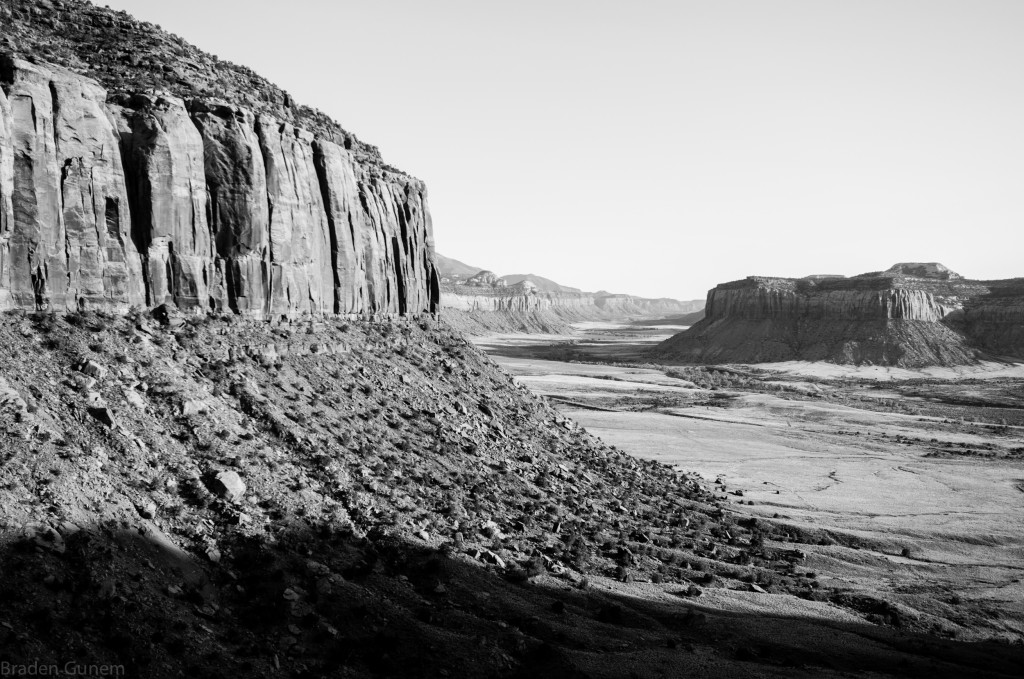 After two and a half hours of floating on the highway and bumping hip-hop like it’s our job we arrived in The Creek. Hints of snow on the north facing hillsides were the only reminder of winter, and after meeting up with some friends we hiked up to the Cat Wall.

That first Creek pitch of the season always hurts. I can’t think of anywhere where cragging hurts more than Indian Creek. Some call it Trad-Sport Climbing. I disagree. Sure gear is usually straightforward and usually abundant, but where does sport climbing hurt like it does jamming your limbs into splitters? Masochism, pain for pleasure, is where Creek climbing diverges from sport climbing.

After passing a crew of Salt Lake City climbers, and almost being blinded by their pale skin that had no doubt been hiding under layers for the ski season, we hiked towards some open climbs. At The Cat there is always an open splitter, provided you’re okay with leading 5.11 and above. As we pass the SLC crew, one notices a sticker Tim has on his helmet that reads, “This is what we do”. The sticker is a tribute to our friend Adam Lawton, who we lost in an avalanche over a year ago. Some of the crew knew Adam and we exchange some friendly words. One thing I love about climbing is the connection to so many people; the entire community is connected by two degrees of separation. One of the last days I ever spent with Adam was at the Cat Wall, and I feel his presence as I often do in the outdoors. 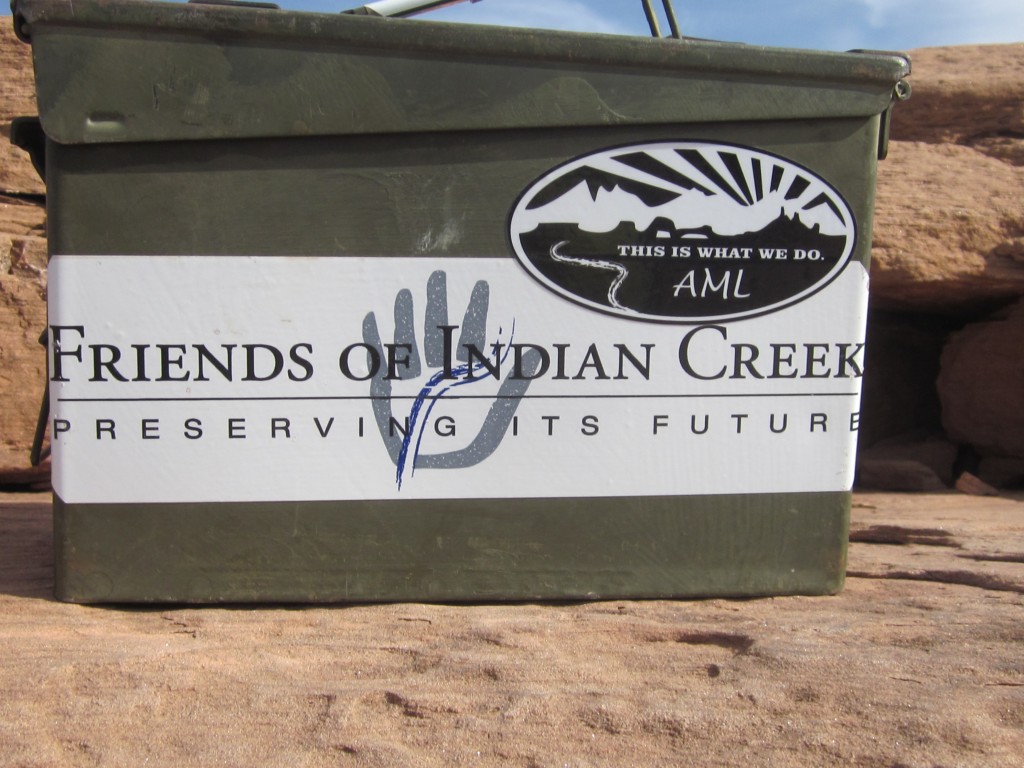 The sun shines brilliantly, and with Seth and Lindsey, the friends we met up with, we are happy and make immature jokes as we always do. Seth wants to warmup on Kool Cat, a fingery 5.11, so Tim and I try the route just to the right of it, an awkward corner, rated 5.10, but with an extremely thin start, feels like 5.11.

I lead the corner, and after a winter of sport climbing, I feel like I’ve never led a crack before. I get scared in the start, jamming just the tips of my fingers in the half-inch crack, placing one solid cam, then a shitty one, and finally reaching better finger jams and placements. Higher up the crack flares and constantly changes shape. The sport climber in me is looking for face holds, as the trad climber who has been in hibernation all winter, wakes up and re-learns how stay within the crack. 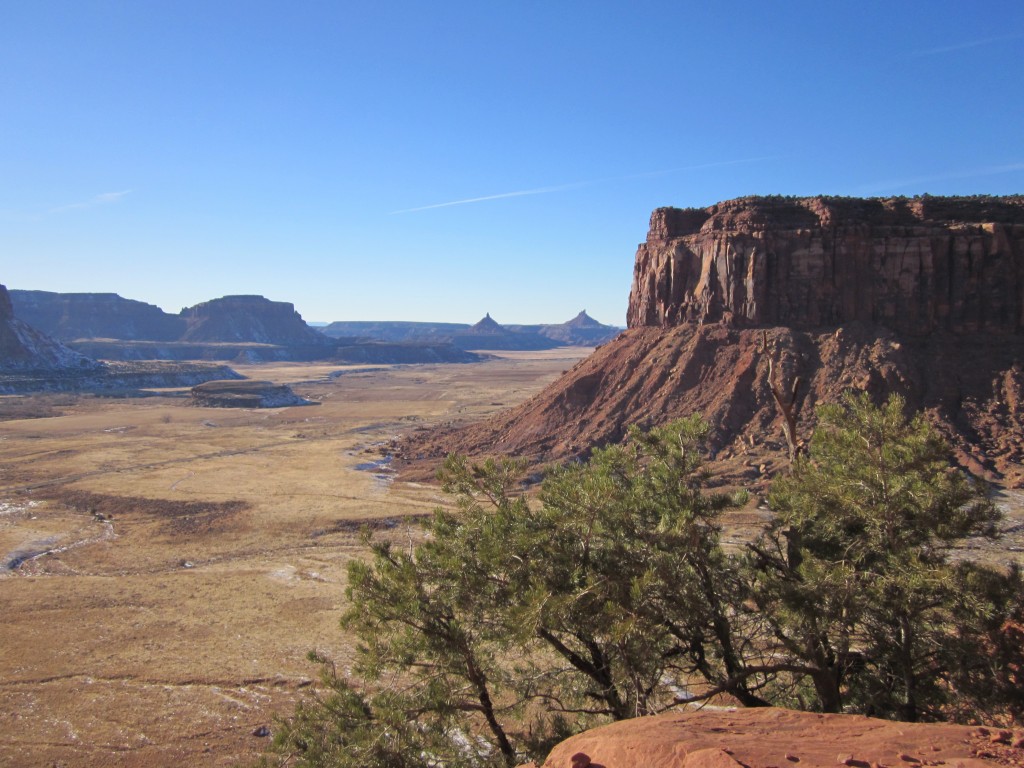 The South and North Six Shooters off in the distance.

After two pitches I’m already tired. My body isn’t used to crack climbing, or being in the desert sun all day. The time is now though; the Cat Wall will soon be closed for the peregrine falcons to nest, and won’t be open until the fall.

Walking by King Cat, a perfect mostly hands dihedral, followed by a wide hands roof, capped with a powerful finishing move, I can’t resist getting on it. I’ve tried this climb several times over the last decade, and never led it without falling. I would probably fall, but as I get older I’m learning that repeated attempts and a positive attitude are two keys to success. As I approach the roof I’m getting pumped and thinking negatively in my mind. “I don’t have this,” my mind says. My body thinks differently, and when the crux moves come up I don’t have time to think, I just climb. After several attempts over ten years I finally clip the anchors having climbed it clean. My day is made. 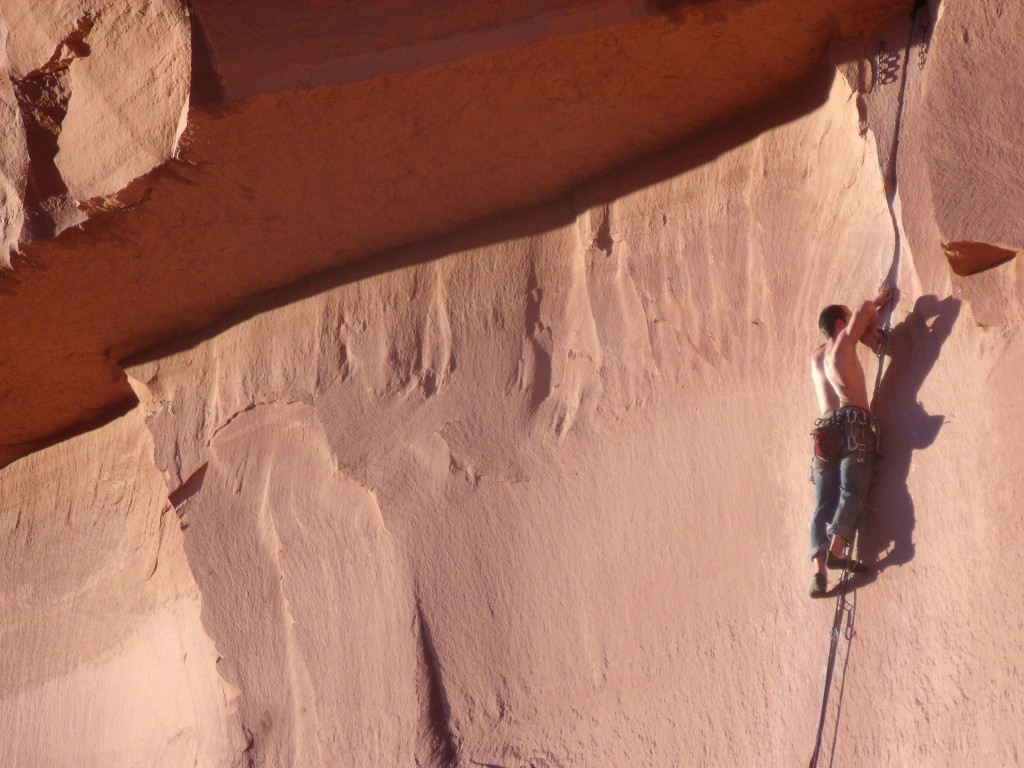 Later Johnny Cat opens up, an inch wide finger crack that is a five-star classic. I’ve climbed this route maybe 20 times, and it’s always a test to see where I’m at. I’ve always wanted to check out the finish, named Tasmania, a wild overhanging roof, that adds an extra 40 feet of climbing to the already challenging Johnny Cat. I barely manage to send the lower finger crack, and go into aid mode, hanging on gear as I scope out Tasmania. It looks extremely thin for about ten feet, but the rest seems climbable. It would probably take me 20 some tries, maybe 30, so probably a lifetime goal. I leave a toprope set up to sesh out the moves.

As I’m lowering down I notice two climbers talking with Tim and they want to give Johnny Cat a burn. It’s their second trip to The Creek, and we move the rope out of the way so one of them can lead it. Incredibly the climber makes it five feet from the chains before he whips; a solid, inspiring effort for anyone their first time on the route, not to mention someone who is brand new to The Creek.

As the sun sets I hop on for one last toprope for the day. The jams are incredibly painful. My finger strength is lacking, and forty feet up I fall, unable to muster the mojo to continue. Suddenly I’m struggling move after move, barely able to make a jam before I hang. When I get to the Tasmania extension I can’t do anything but batman up the rope. Complete and utter failure. 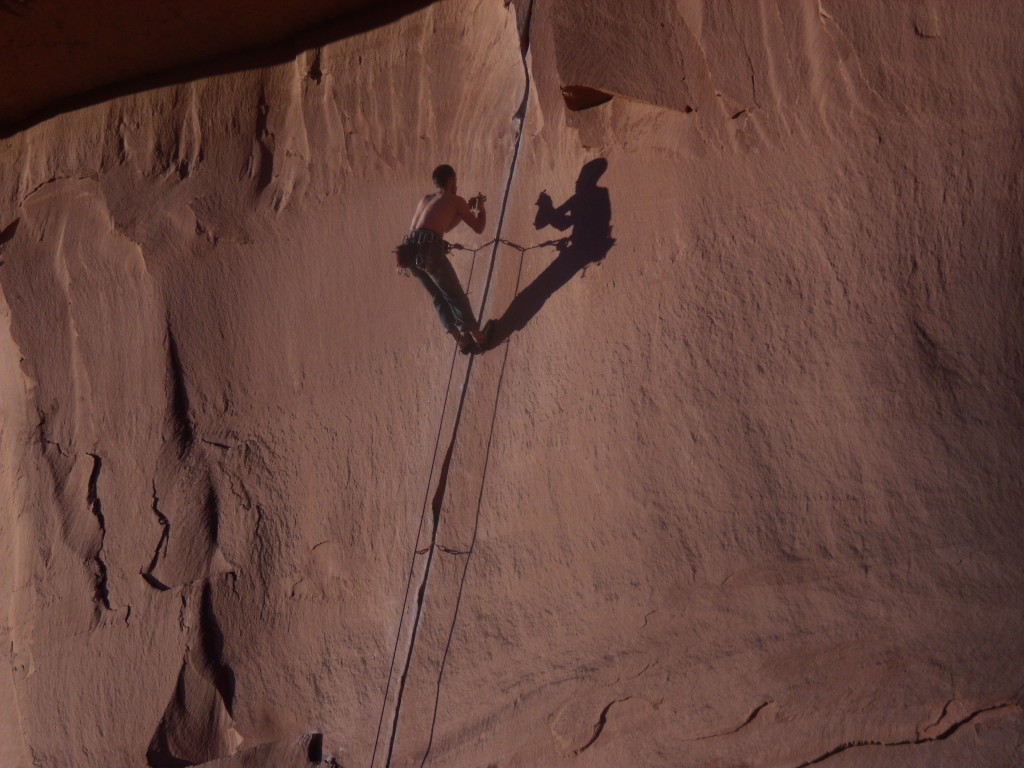 That’s The Creek for you. One minute you’re sending and the endorphins make you feel like you can do anything. The next you’re reduced to beginner status, flailing on the rope like it’s your first day of climbing. That’s fine with me. It was time for a beer, to enjoy friend’s company, a campfire and a hot dinner. Plus, there’s plenty of failure in every success, especially at Indian Creek.

There are four volumes of The Climbing Zine that have been released to date. Volume 4 is available in print, and all volumes are available as e-zines. Volume 5, The Dirtbag Issue, will be released as an e-zine on April 20th of this year.

Luke Mehall is the publisher of The Climbing Zine, and author of Climbing Out of Bed, a definitive collection of rock climbing and mountain town stories, available on Kindle and Nook. A printed version will be released this spring, followed by a book tour in May.